Another tour I took part in during the Summer of Heritage was one of Monkstown Castle. I was very familiar with this building, so I was curious as to learn about the history of the ruins. The first castle built here was built by the Cistercian Monks of St Mary’s Abbey at the centre of a large farm between the 14th and 15th centuries. When King Henry VIII dissolved the monasteries in 1539 Monkstown had a number of owners, including some high profile people in Irish history.  The Cheevers family (a French Norman family who also owned both Dalkey Castle and Bullock Harbour Castle), General Edmund Ludlow (Cromwell’s Master of the Horse in Ireland) and Michael Boyle, Primate, and Lord Chancellor of Ireland. This castle evolved from being a functional building to being a more grandiose residence. The Cheevers had the castle taken off them by Henry VIII, they had it returned to them later on, they moved back in for a while, but finally left it permanently. Today however, all that remains is the gatehouse and the 3 story tower, which once formed one side of a large hall. The tree you see in the bottom image was shown on a map of the area in the 1700’s. 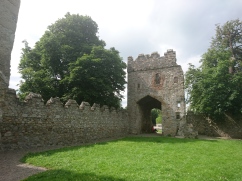 ‘Photography through the Pandemic’ by 35mmc

This is a book that I supported. on Kickstarter as it was put together by a group of photographers that I know (35mmc). Sadly, before the project was finished one of the photographers, John Whitmore died. This book was dedicated to John after his death, and the profits are going toward helping support his daughter. […]