This process dates back to the 1880’s, where you leave the film to develop in a very dilute solution for a longer amount of time then you would if you were using normal development processes, with this process you do very little if any agitation, again, this is different to standard development processing. The technique leads to finer grain, increased perceived sharpness and no marking from movement of fluid over the film. This method does take a significant amount more time than the more usual method.  With this technique you don’t need to agitate the tank, as the developer exhausts against the film more quickly in the more exposed areas, and less quickly in the not so exposed areas, this means that in theory, highlights should be saved and shadow detail should be boosted. The reason I use a semi stand process to prevent bromide drag, which can sometimes happen if you do not agitate the developing tank, so far, I have never had bromide drag on my film rolls that I have developed with this technique. I use this technique for black and white across all film sizes. I know that some people have also used it for colour development, this is something I would like to try in the future. I know that you can also push and pull images on the same roll, which again, is something I want to try in the future. You can have different film stock in the tank too, which is very handy.

This is the technique I use for Stand Development, mine is more of a semi stand process, the temperature of all fluids should be 20 Degrees C. I prewash the film for 5 minutes, in plain water in the development tank, this means that you have brought the film up to temperature and you have washed off the top level of chemical on the film, thereby allowing for more even development of the film. This stage is not essential and sometimes I completely forget to do it with no ill effects at all to the film, but, I try to do it, as it appears to be a good habit. I use Rodinal as my Developer. The film will be in the developer for an hour, so the dilution needs to be weak, so I use a 1:100 dilution (500ml of water and 5ml of developer). You need to have enough developer in the mix, so that it still works. Anything less than 5ml is probably too little developer. After I empty the water from the prewash, I pour in the developer. For the first 30 seconds I agitate and I tap the tank on the counter when I have finished, so that I dislodge any air bubbles that may be present in the film in the tank. For the first 3 or 4 minutes I agitate every minute for 10 seconds, after 4 minutes I then let the tank sit for about 45 minutes, at that stage I prepare the chemicals for the rest of the procedure. At the hour mark, I revert to the usual stop (10seconds) , fix (5 minutes), wash (5 minutes), rinse (5 minutes) process. I use a couple of drops of a wetting agent like Kodak Foto Flow, to stop any drying marks appearing on the film. The negatives may appear dense, but, they work out perfectly. The shot below is one I took on a Holga 120N and developed using the process mentioned above. 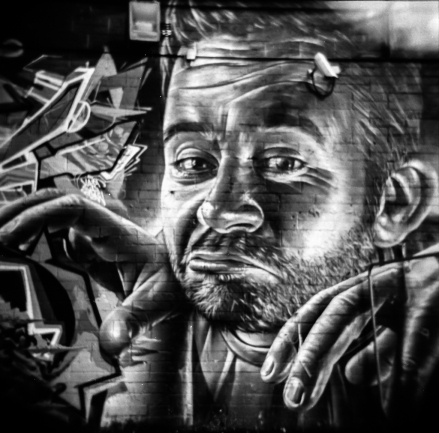