On an incredibly rainy Saturday in January, the Irish Quidditch Cup had to decamp from the waterlogged Trinity pitches to Fairview Park, where the Tournament started later than scheduled, however, we still managed to get through most of the day’s schedule before being ejected by the Park Warden with one match to go. The great news of the day was that Dublin Draiochta Dragons beat Northern Wyvern for the top spot so Dublin will be going to Germany for the European Competition in April.

This full-contact, mixed gender sport comes straight from the pages of Harry Potter, with just enough changes so that we Muggles can play, it has been described as a cross between Rugby and Dodgeball. As you can see from the photos, in the case of Muggle Quidditch, the brooms are made from PVC pipes, the Quaffle is a slightly deflated volleyball and the Bludgers are dodgeballs. The Snitch is someone dressed in yellow, with a tennis ball is a yellow sock hanging out of the back of their shorts. If the Chaser catches the Snitch, it is worth 30 points and the game is over. If a team gets the Quaffle through the hoops, it is 10 points.

The three teams playing were Northern Wyverns (Belfast), Galweinster (Galway) and Dublin Draiochta Dragons (Dublin), out of these three teams Dublin is the oldest team, followed by Belfast and then Galway. The Galway team is a developing team, so for this event, it needed other players and team personnel to help them with the match.

The Galweinster team was made up of members from the Cork Craickensm Mid-Leinster Moon Trimmers, Galway Gridylows and a mix of international players and people from other clubs who wanted to join in and help Galweinster. I had never been to a Quidditch Match before, and although I ended up soaking wet and frozen, I really enjoyed the event.

Congratulations to everyone involved in the organisation of and participation in such a great event.

If you would like more information on Quidditch in Ireland and where you can play it, I have left the Facebook Page for Quidditch Ireland below: https://www.facebook.com/QuidditchIreland/ 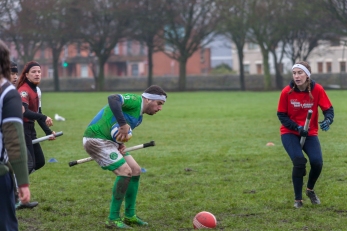 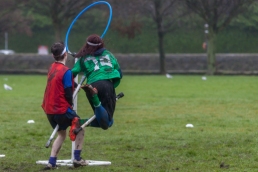 How do you manage change?  Pause Hello Mr/s President, Madam Toastmaster and fellow Toastmasters, and especially your new member Marion Gordon. I wish you the very best in your Toastmasters career Marion. Thank you all very much for your warm and kind welcome and for allowing me to speak to you this evening.  Pause My name is […]