In October I took part in one of the Shoot With Me outings with Offshoot Photographic Society, on this occasion, Seamus led a group that was taking photos of the local ladies Gaelic Football team, Foxcab, who were playing in the Leinster Club Championship. The photos below are from the match that Foxcab played, and won, against Confey in Kinnegad. It was great to be pitchside for such an exciting and fast-paced match, especially given that I had never been to a Gaelic Football Match before. When it comes to sports photography fast shutter speeds are crucial. I intend to attend some more matches during the next season and hopefully improve my sports photography skills. Well done to FoxCab on winning, it was a pleasure to watch such talented and dedicated athletes. 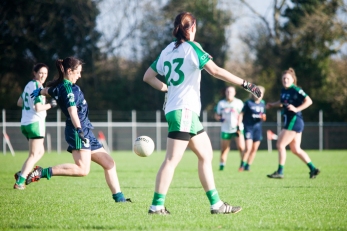