I shot my first roll of 35mm Cinestill X-Pro Daylight 50 Film, to do this I shot it at box speed with a Canon 300V over two mornings, both of which were both sunny and overcast. I used no filters, nor have I post processed these in any way, I had them developed by Conns Cameras in Dublin today, as the information for this film urges you to develop it promptly so that you get the best results possible. These have been scanned from the prints I got back from Conns. I have not included all 36 images, as I just want to give a flavour of what I got with the film. I will buy a couple more rolls to push it and see how it reacts, I will also need to shot some of the 120mm so that I can see the differences between the two formats. Ignoring the errors made by me, I am happy how this stock behaved. Please also note that this roll was just a test roll, so the photos are not the best photos you will ever see, I have a tendency to keep film for ‘something special’, so I thought I would just shoot this on the streets.

Cinestill X-Pro Daylight 50 is a colour negative that comes in both 35mm and 120mm formats, which have certain differences between them due to the backing paper on the 120mm, having not used the 120mm format stock, I will not be commenting on that in this post and I will be keeping my comments to the 35mm version. This fine grain film has been adapted from Kodak Cinema Stock, Cinestill has removed the remjet layer, to allow the film to be shot in stills cameras and developed in C-41. This film is daylight balanced to 5500K and has been optimised for a hybrid workflow, Cinestill claims it has unrivalled highlight and shadow latitude, dynamic colour rendition, is high resolution and is good for portraits and landscapes.

The photo of the doorway (far right of row two) shows how good this film is with highlights and shadows, I took this photo as I thought that it would challenge the film, given that the shadows were pretty close to pure black and the contrast with the highlights was huge. You can see in the photo that the scene has massive contrast, however, you can also still see details in the shadows and in the highlights. I thought that the highlights might have become completely blown out, but they didn’t, which was great to see. The same can be said for the street lights (second last row), you can still see some details in the lights even though I shot straight upwards into the bright sky, so the lights were deep in shadow. I love how fine grained this film is and I really like the way it handles reds and greens, though I think it handles pale skin tones brilliantly, and I can see that it would be great for portraits. As far as I can see from this one roll, this film looks best in brighter conditions. You can see from the shot in the laneway with the men in high visibility jackets, concrete in shade appears to be quiet green compared to some of the other photos. I like this film, and I look forward to shooting it again. However, I have a feeling that by the time I get to shoot it again, the weather conditions here will have changed.

I have included a link to my Flickr Album of these photos, as there are a few more there, should you wish to see them. I also have links to the Cinestill and Analoguewonderland Sites as well as to an Emulsive Article on part one of every stock still made today, in case you want to buy some or you want to learn more about this interesting film stock. 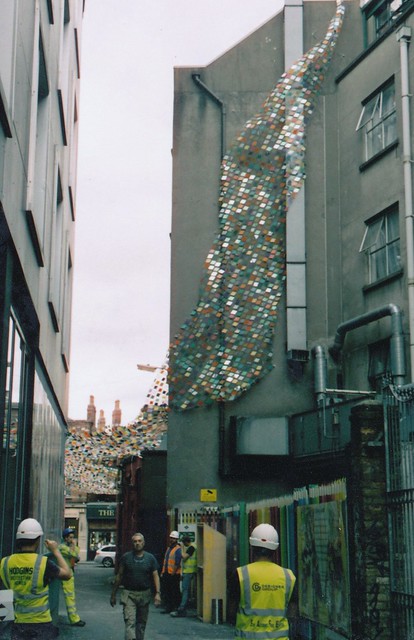